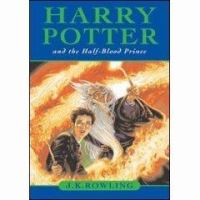 Lord Voldemort has returned and his wrath has been felt in both the Muggle (non-magical) and Wizarding worlds. Severus Snape, a member of Dumbledore's anti-Voldemort Order of the Phoenix but formerly one of Voldemort's Death Eaters, meets with Narcissa Malfoy, mother of Harry Potter's school rival Draco. Snape makes an Unbreakable Vow to Narcissa, promising to assist and protect Draco.
Meanwhile, Dumbledore collects Harry from his aunt and uncle's house and takes him to the home of Horace Slughorn, former Potions teacher at Hogwarts. Dumbledore tries to persuade a reluctant Slughorn to return to teaching and finally succeeds. Later, when shopping for schoolbooks, Harry and his friends Ron Weasley and Hermione Granger follow Draco Malfoy to Dark Arts supplier Borgin and Burkes, where they overhear Draco insisting that the store-owner fix an unknown object. Harry is instantly suspicious of Draco, whom he believes to be a Death Eater like his father.