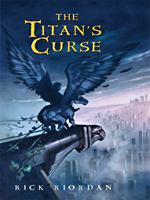 When the goddess Artemis disappears while hunting a rare, ancient monster, a group of her followers joins Percy and his friends in an attempt to find and rescue her before the winter solstice, when her influence is needed to sway the Olympian Council regarding the war with the Titans.
Publisher: Detroit : Thomson Gale, 2007
Edition: Large print ed. --
ISBN: 9780786297016
0786297018

Much like the first two books in the series, the author weaves in humor and cultural references in unexpected places to keep the plot interesting. Even the smallest details of dialogue and description are carefully put together to achieve a balance of action and entertainment for the reader. Again, this is a masterful interpretation of Greek mythology, which in an amateur's hands could easily become overwhelming, but in this series keeps being interesting and relatable in the real world.
The young protagonist Percy Jackson continues on his third journey to the reaches of the mythological world, this time heading to California in his effort to save his friends from the clutches of escaped Titans. As he faces obstacles all over the country, he realizes the importance of valuing and treasuring friendships.
I'd recommend this book for anyone looking for a decent-length novel filled with literary humor and an entire mythological universe condensed into just a few hundred pages.

I finished this book within days. It was a good read, and a good continuation of the series. I loved the funny chapter titles!

Percy, Annabeth, and Thalia are trying to recruit two children of Hades to join Camp Half Blood when a manticore appears and tries to kidnap them. The manticore is forced to retreat when Artemis arrives along with her Hunt, but he takes Annabeth with him. Before he retreated, however, he mentioned a stirring of monsters. Artemis interprets it to be the return of a monster capable of giving someone the power to destroy Olympus, the Ophiotaurus. Worried, she peruses the manticore alone in an attempt to hunt the Ophiotaurus. Once the Campers and Hunters return to Camp Half Blood, a disturbing new prophecy is delivered by the Oracle of Delphi. The questers must save Annabeth and Artemis, but most importantly prevent the Ophiotaurus from getting into the hands of the one Luke is working for.

Excellent continuation of the Percy Jackson and the Olympians series. While all books in the series are good standalone books, with at least one conflict being unique to that book, this is where the set-up for the final conflict starts. I enjoy this because it is fast paced, as well as having an overarching story-line that fits together perfectly.
Ages 12+

It was a dam good book.

I really enjoyed the third installment of the Percy Jackson series as it introduced new characters and built up relationships. After getting attacked at a military school, Annabeth gets captured along with the goddess Artemis, creating an immediate quest in which Percy (with the help of the Hunters of Artemis), must save his stolen friend. The sacrifice made near the end of the story is one of my favorite moments within all of Rick Riordan's novels, and is part of what makes this book remarkable for me.

The Titan's Curse is the third instalment in the Percy Jackson and Olympians series by Rick Riordan. In this novel, combined with Annabeth Chase and new powerful friend Thalia Grace, Percy Jackson finds himself on a new quest with the balance of Olympus as they know it at stake. I really liked seeing the contrast between Percy and Thalia as they are very similar characters. Both of them have their internal struggle of what kind of hero they want to be and are willing to go to great lengths to save their friends. The whole storyline with Zoe Nightshade really was one of the best parts of the novel for me and I'm sad to see her go. One of my few criticisms of this book was I wished the events leading up to this summer were expanded more on. Overall, I really enjoyed rereading it and look forward to seeing Nico grow as a character. 4 Stars @Ruby_Tuesday of the Teen Review Board at the Hamilton Public Library

Rick Riordian is a GENIUS! I love his PJ series, it's epic! If you like this one, also try The Heroes of Olympus, and The Trials of Apollo - both are pretty good (although I like HoO better than ToA).
Seriously, though, Rick Riordian Is. A. Genius.

This book is very sad. It made me cry for Zoe a lot, but seeing Nico and Bianca is just heart breaking I'd rather have Zoe in another book than Annabeth, seeing that Zoe is so loyal to Artemis is so I dunno, Amazing? I love how Percy is caring for Annabeth so much, poor Nico.

This is a great entry into the series

Overall it's a great book. Its the type of book that everyone can read and enjoy.

TheMadBunny thinks this title is suitable for 11 years and over

violet_dog_6820 thinks this title is suitable for 11 years and over

anihacc thinks this title is suitable for 10 years and over

RobertELPL thinks this title is suitable for 9 years and over

floraflower thinks this title is suitable for 8 years and over

KyraJR thinks this title is suitable for 11 years and over

Green_Alligator_24 thinks this title is suitable for 10 years and over

annacleojensen thinks this title is suitable for 9 years and over

Grover was sniffing the wind, looking nervous. He fished out his acorns and threw them into the sand, then played his pipes. They rearranged themselves in a pattern that made no sense to me, but Grover looked concerned.

Aphrodite: "Love conquers all. Look at Helen and Paris. Did they let anything come between them?"

"Didn't they start the Trojan War and get thousands of people killed?"

Aphrodite: "Pfft. That's not the point. Follow your heart."

I started cracking up, and Thalia and Grover joined in.

“Ever had a flying burrito hit you? Well, it's a deadly projectile, right up there with cannonballs and grenades.”

“Stars,” She whispered, “ I can see the stars again, my lady”
A tear tricked down Artemis’s cheek. “Yes, my brave one, they are beautiful tonight.”

really good but you need some quotation

"Do you always try and kill people when they blow their nose?"
-Rachel Elizabeth Dare

“Can’t this thing go any faster?” Thalia demanded.
Zoe glared at her. “I cannot control traffic.”
You both sound like my mother,” I said.
Shut up!” they both said in union.”

There is always a way out for those clever enough to find it.
-Athena

Annabeth studied me with concern. She touched the new streak of gray in my hair. It matched hers exactly-our painful memories of holding Atlas's burden
-The Titans Curse Percy Jackson

Percy Jackson races off to fight the Titan lord Kronos with his sword Riptide with his trusty friend Grover. Grover soon discovers two half-bloods with unknown parentage. Percy Jackson and his young hero friends have just fallen prey to Kronos.

Percy, Annabeth, and Thalia are sent to rescue two half-bloods, Bianca and Nico Di-Angelo. While on this mission, they are attacked by a manticore, but are saved by the Hunters of Artemis. Annabeth is taken captive when the manticore flees. The Hunters, Percy, Thalia, and Grover are sent to camp by Artemis and Apollo. Artemis is soon taken captive and a quest is issued. Grover, Thalia, Bianca and Zoë Nightshade, Artemis's lieutenant, go to rescue Artemis. Percy follows and soon joins the quest. Bianca is killed while facing an automaton. They learn that the Titan Atlas has escaped and was behind the kidnapping of Artemis. Atlas is defeated and returned to holding the sky, but Zoe is killed by Atlas who is her father. Thalia replaces Zoë as Artemis' lieutenant during the gods' summit. Thalia's induction as a lieutenant of Artemis ensures that she never reaches 16, thus escaping the prophecy but leaving Percy as the only one who can fulfill it. They return to camp and Percy informs Nico about Bianca's death. He blames Percy, accusing him of failing to protect her and runs away. Percy learns that the underworld god, Hades, is Nico's father.

In this extremely cool 3rd book of Percy Jackson and the Olympians. there were lots of surprises. There were lots of fighting and story. This was one of my favorite book of series. There was many Bad obstacles but they overcame them all. in this book, Percy, Annabeth,Thilia and Grover goes to a military school to look for two half-bloods! these half-boods are very strong. When they found the two half-bloods, they found out that they werent the only "people" looking for them. The two half-bloods was brother and sister. They had to fight a dangerous monster to get to the them. long the process one of the members was lost.
So the remaining crew took the two half-bloods to Camp Half Blood. They recived a quest to find the lost member. So they asked the Obstle for the profecy of the quest. "Only 5 could come in this quest, one shall be lost, and one shall die by their parents hands". later on the book, they came across the junkjards of the Gods. In that junkyard a new creature raised, and a part of the profecy came alive.
At the end the remainign 4 troop faced one of the dangerous monster thay ever faced yet. it was released from its prison and the 4 worriors had to face it. in the fight they encountered a lost friends and a old enemy!

After a run-in with a manticore, Percy Jackson and his friends must rescue the goddess Artemis (who is currently holding up the sky) from an evil titan called Atlas. On the way, Percy also hopes to save his friend, Annabeth.

There are no notices for this title yet.

Loading...
PPL owns a similar edition of this title.